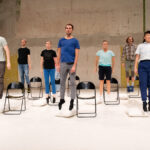 Again? What now? is a work by Yvonne Rainer (US) created specifically for Weld Company in the fall of 2018 and mixes new ideas with recycled older material containing spoken text, music and movement material. We can call the piece ”Yvonne Rainers best bits”. The actual title can also be read as a scream of desperation and protest in response to the world’s anxious state, and more specifically the current catastrophic social and political situation in the United States.

In a career-long relationship with integrating and separating dance history’s influences and contemporary events, Rainer’s work – from dance to film and back to choreography – reflects these sometimes incompatible poles of aesthetic and social. Forever hopeful she starts again.

YVONNE RAINER (US)
one of the founders of the Judson Dance Theater (1962), made a transition to filmmaking following a fifteen-year career as a choreographer/dancer (1960-1975). After making seven experimental feature-length films  — “Lives of Performers” (1972), “Privilege” (1990), and “MURDER and murder” (1996), among others — she returned to dance in 2000 via a commission from the Baryshnikov Dance Foundation (“After Many a Summer Dies the Swan”). Since then she has made six dances, including “AG Indexical, with a little help from H.M.,” “Assisted Living: Do you have any money?” and “The Concept of Dust: Continuous Project – Altered Annually.” Her dances and films have been seen throughout the U.S. and Europe. Museum retrospectives of her work, including drawings, photos, films, notebooks, and memorabilia, have been presented at Kunsthaus Bregenz and Museum Ludwig, Cologne (2012); the Getty Research Institute, Los Angeles; Jeu de Paume, École des Beaux Artes, La Ferme du Buisson, Paris, and Raven Row, London (2014). A memoir — “Feelings Are Facts: a Life” — was published by MIT Press in 2006. A selection of her poetry was published in 2011 by Paul Chan’s Badlands Unlimited. Other writings have been collected in ”Work: 1961-73” (1974); ”The Films of Y.R.” (1989); ”A Woman Who…: Essays, Interviews, Scripts” (1999); and “Moving and Being Moved” (2017). She is a recipient of two Guggenheim Fellowships, a MacArthur Fellowship, and a U.S.A Fellowship.

WELD COMPANY
Weld Company is aiming to rediscover and revaluate the old institution of Dance Company and is updating the Company form through a collective work conducted by one of Weld clearly given structure. Dancers and choreographers from different backgrounds share a common, daily and physical practice. The Company will work with invited choreographers; self-made works and instigate the Swedish dance history. The members contribute with and are involved in selecting the content.

Weld Company could be seen as an enabling structure where new constellations and ideas become. The main focus is on the space freed to practice the art form. To become the dancing body, the dancing community and through this pose questions about dance and choreography today. Yearly a book is being produced with the name ”No Talking No Props”,

Again? What Now? is produced by Weld in collaboration with Nordberg Movement.

Weld Company is produced by Weld
Weld is supported by Stockholms stad, the Swedish Arts Council and Region Stockholm