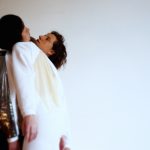 Synchronization in process, the new dance work by Anne-Mareike Hess (LU/DE) is a choreographic essay on our constant striving for global synchronicity and a balanced ecology of time on a social, cultural as well as economical level. It especially focuses on the powerful role the processes of synchronization play in our togetherness. The audience is invited into a vibrant space in which sound, light and three performers indulge into the extremes of the subtle, yet all-pervading forces of synchronization – a constant negotiation of approaching each other and grooving into inside and outside rhythms that culminates into a dense fabric of interwoven relations.

A vehement desire for being one in one time in a choreography in which body, sound and light successively dissolve into each other…

Teaser for "Synchronization in process" by Anne-Mareike Hess from AM Hess on Vimeo.

November 19th at 6pm
Showing of the film "Crowded Exersises" av Anna Ådahl and a lecture by Thomas Schaupp. In his lecture dance-dramaturge Thomas Schaupp, Berlin, is going to talk about different notions of synchronicity and the crucial role processes of synchronization play in our every-day life. A special focus will also be put on the works "Crowded Exercises" by artist Anna Ådahl (SE) and Synchronization in process by choreographer Anne-Mareike Hess
– two examples of art that reveal the relevance of this topic in our contemporary society.

ANNE-MAREIKE HESS (LU/DE)
Anne-Mareike Hess is a dancer and choreographer. As a performer she has been working a.o. with William Forsythe (Human Writes), Ingri Fiksdal (cosmic body), Rosalind Goldberg (MIT and Jump with me!) and Miriam Horwitz (Nijinsky). Anne-Mareike‘s own choreographies have been performed at different festivals in Europe and Canada. 2012 Anne-Mareike was awarded with Prize for emerging artists by the “Stiftung zur Förderung junger Talente”, Luxembourg. 2015 Anne-Mareike was awarded with the “Danzprais” from the Ministry of Culture [Lux]. Anne-Mareike is part of the artist duo Horwitz & Hess.Their piece Palais idéal received in 2015 the dance and theatre prize from the city of Stuttgart (DE).

THOMAS SCHAUPP (DE)
Thomas Schaupp, Berlin, studied theatre- and dance-theory at Freie Universität Berlin. As a dramaturge he is collaborating with several choreographers, currently with Kat Válastur, Enrico Ticconi & Ginevra Panzetti, Anne-Mareike Hess and Stian Danielsen among others. As a lecturer and critic he has been invited to festivals and conferences across Europe and Canada. In the winter semester 2016/17 he is a guest-teacher at the Inter-University Centre for Dance in Berlin.