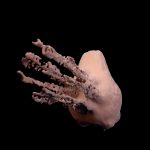 The artist and costume designer Erik Annerborn has designed the costumes for Weld Company since 2013. Now he presents his exhibition The Abyss at Weld with sculptures, photo and video art. Thursday evening, the exhibition will be guested by the Berlin-based artist Yishay Garbasz.

There is a hole in this world.
Behind your eyes, behind closed doors.
The whale of time
with one eye and a million mouths
speaks:
"I am the Abyss.
I am your truth.
I am the wishing well.
Your promise of reality."
All who hear it realize
to draw strength from within.
To know, to dare, to will and to keep secret.
The world has come to a stop.
Underneath it all, love breaks free.
When Civilization ends,
the body will remain.

The Abyss shows perspectives on strength and struggle, and aims to push the viewer over their edge and into the hidden parts of themselves. It is a crisis-inducing machine that serves as a backdrop for collapse and awakening. This is where decisions are truly being made. The Abyss is a gate to a place where energy and love can be found and brought back to an ordinary world, in dire need of a human that rises to the challenges of our times.

The Abyss presents a turning point and a visual representation that aims to create turbulence and discord, sandwiched between the Stockholm Fashion Week and the election.

Thursday evening Yishay Garbasz will present her work ”In my mother's footsteps”, where she traces her mother's journey to Theresienstadt via Auschwitz-Birkenau, and the death marches to the Bergen-Belsen concentration camp.

Supported by: Weld and The Royal Institute of Art

ERIK ANNERBORN (SE)
is a costume designer and artist based in Stockholm. He is currently enrolled at the Royal Institute of Art where he applies his fashion background on digital sculpting and animation. His earlier works include costume for Something Must Break (directed by Ester-Martin Bergsmark) and Weld Company. He has also been part of the Banff residency “BRiC: 2067” in 2017. The Abyss is his first solo exhibition in 5 years. This fall sees Erik continue working at RIA's 3D-lab, as well as working with Ester-Martin on their new sci-fi project “Infinite Possibilities”.

YISHAY GARBASZ (GB/IL)
is a Berlin-based fierce femme and activist, and she is Germany’s first trans woman triathlete. Yishay is a former artist and photographer. For over 19 years her work was exhibited in major international galleries, museums, and festivals, and she has published two books, In My Mother’s Footsteps (Hatje Cantz, 2009), and Becoming (MBP, 2010). Her work explored gender, trauma, and dehumanization.Her work explored gender, trauma, and dehumanization. She has worked extensively in the Fukushima Nuclear Exclusion Zone, and along the DMZ in Korea taking photographs.